Estella B. Lawson, a lifelong resident of Calvin Township, died Sunday, Dec. 11, 2011 at Riverview Manor in Three Rivers at the age of 102. She was born Feb. 25, 1909 in Calvin Township, the second child of Oscar and Edna (Vaughn) Sanders. She married Forest M. Lawson on July 7, 1927 in Goshen, Ind. He preceded her in death on Jan. 19, 2002. She was also preceded in death by three brothers, Lester Sanders, Marshall Sanders and Merle Sanders.

Estella lived to enjoy five generations of her family.

She professed a hope and faith in Christ at a revival meeting at Bethel AME Church in 1926 under the Rev. C.J. Embry, pastor of the church at that time and assisted by Malissia Brown, an evangelist. She was baptized in Christiann Creek two miles west of Calvin Center. She became a charter member of Calvin Community Chapel which was organized and built in 1928 under the Reverend Allen Peavy of Dowagiac, pastor of the church.

In the early years of the church she sang in the choir and belonged to the Altar Circle, helping her mother prepare communion for 21 years. After her mother’s death, she continued preparing communion for 20 years with the help of her daughter Audrey. From 1978 to 2000 she enjoyed being historian of the church.

In 1941 and 1942 she and her husband Forest were elected Worthy Matron and Worthy Patron of St. Mary’s Chapter #10 Order of the Eastern Star. Together they worked diligently with the membership.

On Aug. 2, 1982 Estella received a Life Membership Certificate from Prince Hall Grand Chapter O.E.S. Jurisdiction of Michigan for 53 years of service. She served an additional 22 years until the hall closed in 2004, totaling 75 years of service. 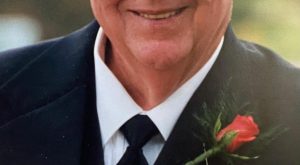