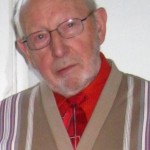 He was born August 19, 1929 in Burr Oak Township, Michigan eldest son of the late Leo and Elizabeth (Nusbaum) Currier.

John resided in the Sturgis and Burr Oak, area his whole life. On August 31, 1947 he married Edna Miller at the Locust Grove Mennonite Church in Burr Oak, Michigan. She died July 2, 2013.

John was a talented meat cutter by trade. He worked for the Wall Packing Company in Sturgis from the age of 16 until the company closed in 1969. At that time he joined the Economy Market in Sturgis where he worked until his retirement. Following his retirement he worked as a grounds keeper at the Klinger Lake Country Club in Sturgis.

John enjoyed fishing, riding motorcycles and racing cars. He dearly loved his family and was so very proud of his grandchildren and great grandchildren.

He was preceded in death by his parents, wife and one grandson: Jacob Currier.

The obituary is also at www.hackmanfamilyfuneralhome.com where personal messgaes of support may be left for the family.