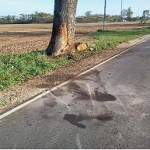 A Three Rivers man was killed Sunday evening in a single-car crash in Park Township.

Sheriff’s deputies said Boring was traveling north on Buckhorn Road when his vehicle left the roadway and struck a tree. Boring was pronounced dead at the scene.

A department media release indicates it is unknown whether speeding or alcohol were involved. Boring was not wearing a seatbelt, according to authorities.