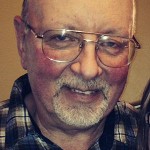 Roger retired at age 50 from Ross Laboratories, Sturgis, where he began working at age 18. Roger enjoyed watching IU basketball, and even after moving away from LaGrange, he continued to attend Lakeland basketball games.

He was preceded in death by his parents and brother-in-law Robert Yoder.

Roger’s family will miss him dearly but will smile as they think of him fishing once again with his father and cheering on the Lakeland High School basketball teams from a much more comfortable seat.