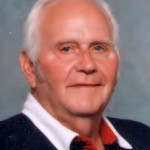 William Artley (Bill) King, 85, of White Pigeon, passed away Sunday, July 6, 2014 at Elkhart General Hospital, Elkhart, IN. William was born along with his twin Robert C. King, in Bristol, IN on December 21, 1928, a son of Carl and Bernice (Artley) King. Bill graduated from Bristol High School in 1949. On August 1, 1952 he married Ann M. Young in Constantine. They spent their life together living and working on the family farm. Bill was a friend to everyone. He enjoyed going to Shipshewana livestock auctions and visiting at the restaurant. Bill also loved listening to hunting stories his friends told over a cup of coffee and a donut.

Relatives and friends will be received Wednesday 2-4 and 6-8 p.m. at Eley Funeral Home in Constantine. Religious Services will be at Porter Baptist Church, Constantine, Thursday at 11:00 AM with Pastor Randy Peterson officiating. Interment will be at Oakridge Cemetery in Bristol, IN. Memorial contributions may be directed to the Church. Messages may be left at www.eleyfuneralhomes.com.