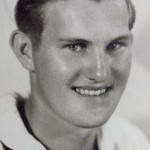 Frederick Flynn Baker, age 92, of Constantine,  made his final flight to Heaven on Tuesday, July 8, 2014, at his home. He was born in Orlando, FL on May 15, 1922, a son of Harold and Marjorie (Flynn) Baker, Sr. He attended school in Constantine. From 1941-1946, Fred served in the U.S. Navy as a Boatswains Mate 1st Class during WW II serving in the Pacific Theater. On December 15, 1945, he married Christina L. Myer in Constantine. She preceded him in death in October 1976. He later married Laura (Suarez) Carlson on Nov. 5, 1977, in Three Rivers. Fred had worked as a diesel truck mechanic at various companies. He then retired from the Constantine Creamery in 1984, after 20 years of service. He was a member of the Three Rivers Church of the Nazarene. Fred was an aviation enthusiast; building and flying his own model airplanes as well as full size airplanes. He also enjoyed fishing, hunting and traveling.

Relatives and friends will be received Friday from 5-8 PM at Eley Funeral Home in Constantine. Religious services will be Saturday at 11:00 a.m. at Church of the Nazarene, Three Rivers, with Reverend Robert Anderson officiating. Interment will be at Constantine Township Cemetery at 2:00 p.m. with military honors. Memorial contributions may be directed to the Wounded Warriors Project or the charity of one’s choice. Online messages may be left at www.eleyfuneralhomes.com.