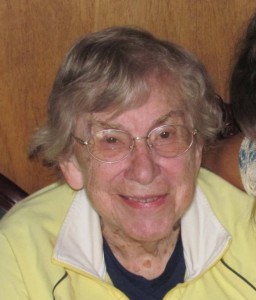 Frances “Fran” Belle Stoppenbach, age 91, of Three Rivers passed away on Friday, August 15, 2014 at Heartland Health Care Center. Fran was born in Quincy, MI on June 7, 1923 the daughter of Archie and Iva(Roth)Smith.

Frances graduated from Coldwater High School in 1941. She then went to work for her brother Darryl at the A&P grocery store in Coldwater, Dr. Thomas who was an Optometrist in Coldwater, and GTE in Dowagiac and Three Rivers as well. Fran was also involved with GTE Retired Luncheon Group for several years after her retirement in 1984. Fran was a member of Immaculate Conception Catholic Church, Parish Council President, and a member of the Daughters of Mary for many years. Fran volunteered much of her time at ICC helping with funeral luncheons, counting the collection money each week, working in the religious goods room, and welcoming new families to the parish. Fran was a member of the Extension Club, Hospital Auxiliary groups, and sold Avon for more than 20 years.

She was preceded in death by her loving husband, Raymond Stoppenbach, brother, Darryl Smith, and sister, Vera (Smith) Bergman.

A Mass of Christian Burial will be held at 11:00 a.m. on Thursday, August 21, 2014 at the Immaculate Conception Catholic Church of Three Rivers with Fr. Mathew Manalel as celebrant.

Memorials in memory of Fran may be directed to the Immaculate Conception Church Daughters of Mary. Envelopes available at Hohner Funeral Home in care of arrangements.