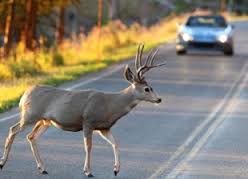 The odds of hitting a deer with your vehicle in Michigan have gone down slightly but they’re still 1 in 94, according to claims data from State Farm Insurance. Michigan ranked 11th in the nation when it comes to deer-vehicle collisions. That’s down from 10th the previous year. The insurer estimates that, nationwide, the cost per claim of a collision is $3,888, up nearly 14 percent from last year. November and October are the worst months for accidents involving deer and State Farm says high-beams and alert drivers are more effective than deterrents like whistles. For the eighth year running, West Virginia topped the list with a 1 in 39 chance of hitting a deer.  The national average is 1 in 169.  (MRN)