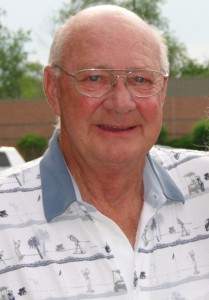 Wayne attended Cassopolis High School and worked as an auto salesman for many years before starting his own contractor business, Waja Builders. He attended Temple Hill Baptist Church and was a member of the Cadillac Lions Club and the Cadillac Elks Lodge #680. Mr. Green loved sports, watching his grandchildren play sports, playing golf and cards. He had a great sense of humor and loved to tell jokes. Mr. Green knew how to make everyone feel special and lived out his life motto: live, love, laugh.

He was preceded in death by his parents; a son, Spencer Warne in 2008; a sister, Joan Schwartz and in laws, Raymond and Lucille Benson.

Funeral services were held at 12:00 noon, Wednesday, September 10, 2014 at Temple Hill Baptist Church in Cadillac with Reverend Jack Miller and Pastor Doug Tindall officiating.  Burial was at Maple Hill Cemetery in Cadillac. Memorial contributions may be made to the family or Heartland Hospice. An online guestbook is available at www.petersonfh.com