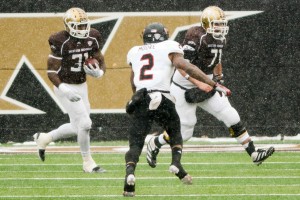 On the snowy turf of Waldo Stadium, Northern Illinois cooled off a hot Broncos squad with a second half comeback on Friday, Nov. 28, that included six WMU turnovers. The Huskies strong second half offense topped the Broncos, 31-21, which would have given Western an appearance in the MAC championship.