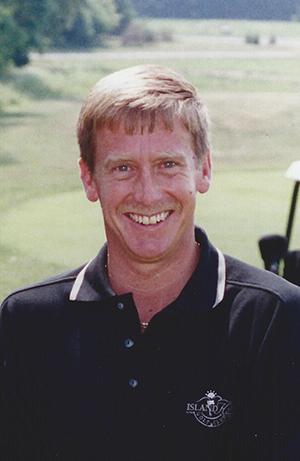 Rick resided most of his life in Sturgis and he was a graduate of Sturgis High School with the class of 1978.

On Sept. 2, 1988 he married Kimberly Hill at the Kirsch Gardens in Sturgis.

From the time Rick was 14 years old he worked at Sturgis Molded Products in Sturgis, the company his father founded. Following the death of Rick’s father he and his brother and sister assumed the ownership and operation of the company. Rick’s involvement in the company was for over 25 years until his eventual retirement.

Many will remember Rick as a genuinely generous man. He was a strong supporter of many community projects. Two special programs for Rick were the Sturgis High School Tool Room and St. Joseph County 4-H. He took pride in presenting the Paul P. Clark Memorial Trophy Buckle in memory of his father for 20 years at the St. Joseph County 4-H Fair.

Rick was a gifted man artistically and he had a true mind of the engineer he was. He had many hobbies and enjoyments, some of which would be traveling, especially to Silver Lake, riding his 1977 Harley Davidson Super Glide, his customized 1997 Ford one ton Bronco, riding jet skis, and ATV’s and playing golf. Rick may have had many interests and involvements but what he cherished most was times he was surrounded by his family.

In accordance with Rick’s wishes cremation will take place. A gathering of family and friends to remember and celebrate the life of Rick Clark will take place from 2-5 p.m. Sunday, Jan. 25 at the Elks Lodge, 66200 Grey Lake Rd. in Sturgis.