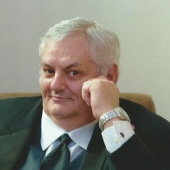 Charles F. “Charlie” Comden, age 61, of Sturgis, passed away Sunday afternoon, February 8, 2015 at Borgess Medical Center in Kalamazoo after fighting a sudden illness.
He was born September 24, 1953 in Bryan, Ohio son of Richard and Betty “Peg” (Hendrickson) Comden.
Charlie married the love of his life, Geraldine “Gerri” Ortmann May 26, 1972 at the Holy Angels Catholic Church in Sturgis. They lived in Sturgis their entire married life and in the same home for 37 years. Charlie was self-taught in all phases of construction from plumbing to framing. Skills he used for many years making their home able to accommodate the growing family.
Charlie resided in Sturgis since 1972 coming from Bronson where he was a graduate of Bronson High School with the class of 1971. His early life was lived in Ohio.
Charlie had a true dedication to his working life. He was a talented tooling engineer by trade. For 34 years he was a dedicated engineer for Multiplex, Inc. in Howe, a career he enjoyed until the company closed. He also enjoyed the fact that his youngest son also joined the company. For the past four years he had been employed by Benteler Automotive in Goshen.
He was a member of the Holy Angel Catholic Church in Sturgis and enjoyed building models, his aquarium and tropical fish, coin collecting, going to movies especially with Gerri for their weekly date night.
His earthly presence will be greatly missed by his surviving friends and family including his loving and dedicated wife of 41 years, Gerri; his children: Chris (Jessie) Comden of Vestaburg, Kevin (Jennifer) Comden of Fenton and Kim (Marc) Ware of Sturgis; eight grandchildren: Jonathan, Alexis, Dillan, Nick, Jeremiah, Anna-Marie, Claire and Cooper; mother: Peg Webb of South Bend, Indiana; brother: Richard Comden, II of Niles; sisters: Sharole Beckman of Beaverton, Oregon and Sam Hankinson of Rapid River; his mother-in-law: Rita Ortmann of Sturgis along with several cousins and in-laws.
He was preceded in death by his father: Richard Comden; beloved uncle: Robert Comden; beloved aunt: Judy Comden and loving father-in-law: Norby Ortmann.
The family will receive friends from 4:00 to 7:00 P.M. Wednesday at the Rosenberg Chapel of Hackman Family Funeral Homes, 807 E. Chicago Rd., Sturgis, MI 49091, 269-651-3284. The Rosary will be recited at 7:00 P.M. Wednesday at the funeral home. The Funeral Mass celebrating the life of Charles Comden will be held at 11:00 A.M. Thursday at the Holy Angels Catholic Church in Sturgis. The Rev. Father Richard Altine and the Rev. Father German Perez-Diaz will officiate. A graveside committal will follow the service at Oak Lawn Cemetery in Sturgis.
Memorial donations would be appreciated to the family c/o: Gerri Comden, 69565 Sunnyfield Rd., Sturgis, MI 49091.
The obituary is also at www.hackmanfamilyfuneralhome.com where personal messages of support may be left for the family.