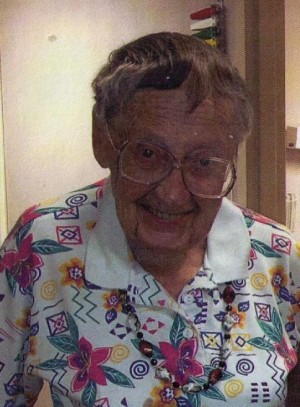 Virginia Mae Burkhardt passed away on May 1, 2015 at her home in Ellicott City, Maryland with her husband Walter and her son Robert at her side. Virginia was born on April 23, 1925 in Chicago to Robert Lyle and Lura Mae Campbell. During her childhood years, her family, like others, were greatly affected by the Great Depression. When the money ran out, they moved to the farm of their aunt and uncle (commonly referred to as Aunt Dolly and Uncle Polly) in Morning Sun, Iowa. Virginia talked about the several years on the farm as some of the happiest of her childhood. They did not have much but what they had they cherished. She talked about how the geese would often chase her around the barnyard.
Later, she graduated from high school in Maywood, Illinois and after high school went to work for the railroad retirement board. She traveled around and listened to appeal cases and it was one of her most favorite jobs. Later she worked for the veteran’s administration in the federal government for many years. After high school, she also spent many happy vacations traveling around in the west and Canada with her sister Dorothy and their friend Mary.
In 1961 she met Walter Burkhardt at a dance and later that year they were married. They spent the next 53 years together until her death. In 1970, while living in Deerfield Illinois, she noticed an ad in the paper about job openings for Walter in Colorado and she and Walter and their two sons moved from Chicago to Arvada, Colorado just west of Denver. She wanted her sons to grow up in a western environment with mountains around them.
Through the years, they spent many happy days in the mountains hiking and camping and the two sons learned to enjoy skiing. They purchased some property up on Columbine Lake next to Rocky Mountain National Park and built a summer cabin there. She loved sitting on her back deck and watch the deer and moose come down to the lake to feed. They spent many a happy year there and would bounce back and forth between their cabin and their home in Arvada on Lake Arbor golf course.
She loved to play golf and even though she never thought she was very good, she continued to play golf until she was 85 years old. In 2012, she and Walter made a big move and moved out to Maryland to be close to her sons Robert and Walter who by now were living in the Washington DC area.
She was a very humble person who always put others ahead of herself. One of her favorite moments in the east was when her son Robert took her to Coney Island New York on her 80th birthday to buy her an original Coney Island hot dog.
She is survived by her husband Walter, sons Walter Jr. and Robert, two granddaughters Andrea and Julie, sister Dorothy, and 6 nieces and nephews. They will all miss her very, very much.
Visitation will be Saturday from 9-11 AM at the Eley Funeral Home in Constantine, MI, where services will follow at 11:00 AM. Interment will be in Constantine Cemetery. Memorial contributions may be directed to the Denver Zoo at www.denverzoo.org or Dumb Friends League of Denver (takes care of abandoned pets) at www.ddfl.org.. Condolences may be left at www.eleyfuneralhomes.com