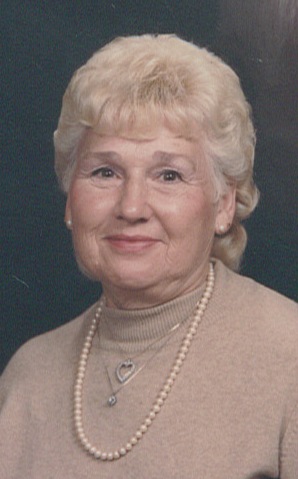 Louise Madelyn Kennedy passed away on Monday, August 3, 2015 at Sunshine Care Home surrounded by her loving family and caregivers She was born on February 4, 1924 in Schoolcraft, MI the daughter of Fred G. Stiver and Mahala Taylor Stiver. On June 27, 1942 she was united in marriage to Jack V. Kennedy Sr. at St. Monica’s Catholic Church.
Mrs. Kennedy has been a lifelong resident of this area. She was formerly employed at Lee’s Drive Inn and then Three Rivers Hospital. She was a nurse’s aide and enjoyed her job. Louise loved to travel with her husband and friends. They collected many antiques and took pictures of every state they were in. They made it to every state except two. Jack and Louise loved to dance and gamble at different casinos. They went to the Eagles every Saturday night. Louise loved shopping, getting her hair done, and spending time with her family. She was also a faithful member of the Immaculate Conception Catholic Church in Three Rivers.
Louise is survived by her sons, Jack V. Kennedy Jr. (Patricia Kennedy), Keith A. Kennedy, of Three Rivers and grandchildren Mary Jo Kennedy Miller (Chris Miller), of Three Rivers, Cathleen Kennedy, Cynthia Kennedy, of Los Angeles, great granddaughter Mary Christen Miller, brothers Kenneth (Shirley) Stiver of Schoolcraft, Gilford Stiver of Portage and many nieces and nephews.

The family will receive friends from 5:00 – 7:00 p.m. on Monday, August 10, 2015 at Hohner Funeral Home.
Mass of Christian Burial will be held at 11:00 a.m. on Tuesday, August 11, 2015 at Immaculate Conception Catholic Church of Three Rivers with Fr. Antony Rajesh as celebrant.
Interment will be held at Schoolcraft Cemetery, Schoolcraft, Michigan.

Memorial donations in memory of Louise may be directed to Three Rivers Hospice. Envelopes available at Hohner Funeral Home in care of arrangements. Online condolences may be left for the family at www.hohnerfh.com.