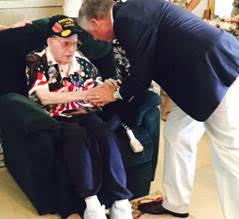 Goldacker was part of the 5th Ranger Battalion that landed on the beaches of Normandy, France, during the D-Day invasion on June 6, 1944. The 5th Ranger Battalion was charged with scaling the cliffs at Pointe Du Hoc, a harrowing 100-foot climb, to knock out heavily fortified German casements and gun pits. Goldacker, only 19 at the time, was shot in the back and survived a night in an open battlefield – scared he would die and be buried on foreign soil. Goldacker survived and the Rangers at Pointe du Hoc took the cliff.

“It was a true honor to meet Mr. Goldacker, his wife Carolyn, and members of the Goldacker family,” said Upton. “On D-Day, Mr. Goldacker and his fellow Rangers represented the absolute best of the American spirit: Unmatched skills and bravery of the highest order. As memories of the Greatest Generation fade, it is more important than ever to recognize their service to our country when the world needed it most.”