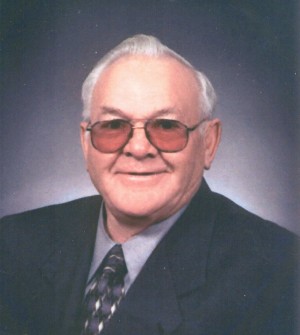 Bill Harman, age 84, of Union, passed away at Lakeland Medical Center in St. Joseph, MI, Wednesday, January 06, 2016. He was born in Etna Green, IN on May 20, 1931, a son of Lowell and Martha (Reed) Harman. On March 16, 1968 Bill married Evelyn O’Shea in Nappanee. She preceded him in death on June 28, 2014. He worked at Coppes Kitchens, Nappanee, and Bendix Corp., S. Bend, retiring in 1980. He owned and operated Evie’s Tasty Queen in Union with his wife from 1970-1978. Bill later worked as a partner at American Waste Systems in Union. He attended Mottville Community Church and was a member of Chapel Hill Missionary Church. Bill enjoyed wintering in Florida, camping with his kids and the outdoors.

Relatives and friends will be received Friday from 2-4 and 6-8 PM at Eley Funeral Home, Constantine where Religious Services will be Saturday at 11:00 AM, Pastor David Bell officiating. Interment will be in Plum Grove Cemetery, Pastor Ken Bontrager officiating.   Memorial contributions may be directed to SEPSA/Porter-Mason Fire Dept. Messages may be left for the family at www.eleyfuneralhomes.com.