A man accused in a shooting rampage in Kalamazoo, told detectives that he shot a woman outside a restaurant after she declined his request for a dollar, according to a state police report.

Jason Dalton told detectives that he had asked the woman “if she could spare a dollar to make America great again,” The Kalamazoo Gazette reported Friday.

State police Sgt. Kyle Gorham wrote in the report that Dalton said he was going to leave after shooting Mary Lou Nye, but he heard other people screaming, so he turned his gun on them.

In all, four people were killed inside two cars parked outside the restaurant. A fifth person — 14-year-old Abigail Kopf — was wounded.

The statements were included in reports released Friday through a Freedom of Information Act request.

Dalton is accused of killing six people and wounding two others on Feb. 20 between stints driving passengers for Uber.

Documents released in March by the Kalamazoo Department of Public Safety and Kalamazoo County sheriff’s office contained a police report in which Dalton told investigators he was being controlled by the ride-hailing app through his cellphone.

Dalton told authorities after his arrest that when you “plug into” the Uber app, “you can actually feel the presence on you.” He said the difference between the night of the shootings and others was that an icon on the Uber app that is normally red “had changed to black.”

He has been ordered to undergo a mental competency exam.

Gorham wrote in his report that Dalton also described how the Uber app on his cellphone took him over the day of the shootings. Dalton also said that at one point he went to his home, put several guns into a bag and put them in his vehicle.

In the report he describes the shootings at each of the three locations.

The first victim, Tiana Carruthers, 25, was asked if she had called Uber for a ride before she was shot multiple times outside an apartment complex. Carruthers survived the shooting.

Later, Richard Smith and his 17-year-old son, Tyler, were shot and killed while looking at vehicles at a car dealership.

Gorham wrote that Dalton said he told them, “hello,” before they were shot.

Their slayings preceded the shootings outside the restaurant.

Dalton said “he came back to reality” when police arrested him early the next morning, according to the report.

At the end of the interview with Gorham, Dalton was asked how he felt about the shootings.

“Jason stated he felt that people are going to look at him like he is a monster,” Gorham wrote.  (AP) 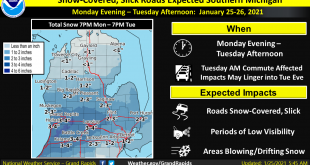 Light snow will spread into the area late this afternoon.  Snow will become heavier this …