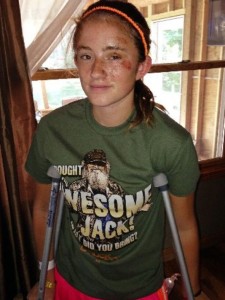 A mother bear that mauled a northern Michigan girl as she jogged along a woodsy path nearly three years ago has been killed after mortally wounding a pet dog that apparently was chasing one of her cubs, state officials said Wednesday.

The bear was shot in a rural township near Cadillac, about 2 miles from where Abby Wetherell was attacked in August 2013, said Ed Golder, spokesman for the Michigan Department of Natural Resources. Abby, then 12, played dead in a desperate attempt to survive and needed more than 100 stitches to close deep wounds on her left leg and back. Authorities set traps but didn’t catch the bear.

The animal was killed April 30 by a man whose name was not released. Golder said the man let his dog out of the house and the Jack Russell terrier began pursuing what looked like a bear cub. The adult bear then appeared and attacked the dog before retreating.

As the owner tried to help his dog, the bear returned and the man shot her. The dog later died. Investigators determined the man had acted in justifiable self-defense, Golder said.

Genetic testing at Michigan State University found that DNA samples from the bear matched samples taken from Abby’s clothing after she was attacked.

“DNR staff is relieved to have this matter resolved for both the Wetherells and the community,” said Keith Kintigh, an agency field operations manager.

An analysis at the agency’s Wildlife Disease Laboratory in Lansing turned up no evidence of rabies or other illnesses that might have explained the bear’s aggressiveness, Golder said.

“Likely it’s just a sow protecting her cubs,” he said.

The analysis showed that the 9-year-old bear had given birth to three litters during her lifetime — including one this spring and another in 2013, although it was never determined whether her cubs were nearby during the attack on Abby.

Abby’s mother, Elizabeth Wetherell, said the family is grateful that the bear no longer poses a threat. Abby is now 15 and has physically healed — despite still bearing scars — but has never gotten over the terror of the ordeal, Wetherell said.

“She’s had a hard time sleeping, had nightmares,” Wetherell said in a telephone interview, adding that shortly before officials informed the family Tuesday that the bear was dead, Abby had wondered aloud, “Is there ever going to be a day when I don’t think about this?”

After getting the news, “you could tell a weight was lifted off her,” Wetherell said.

Abby is still an avid runner but usually sticks to well-traveled roads now, her mother said. When she does return to the path near the family hunting cabin where the bear assaulted her, she brings her German shepherd along.

Michigan has roughly 11,000 black bears, according to the Department of Natural Resources. About 80 percent live in the Upper Peninsula. But there is an established population in the Lower Peninsula’s Wexford County, where the attack happened.  (AP)

A bridge on a heavily traveled north-south route in St. Joseph County will be closed …