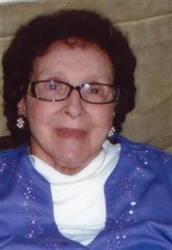 Joyce May Hoyt, age 83, of Three Rivers passed away peacefully surrounded by her family on Wednesday, June 22, 2016 at Fairview Living Center. She was born in Three Rivers, MI on October 6, 1932 the daughter of Roy Franklin and Jenny Bell (Kline) Haines.

Joyce graduated from Three Rivers High School with the class of 1950. She was united in marriage to Robert Veigh Hoyt on September 29, 1951. Joyce began work as a nurse aid for the Three Rivers Hospital for many years. She then went on to work for Buy Low Grocery Market and in her later years was a custodian for the Three Rivers School District.

Joyce was a dedicated mother of eight children. Her family has always been the center of her life. At every stage of her life Joyce made many lasting friendships and everyone will remember her loving smile and extreme kindness.