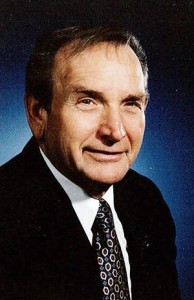 Walter Raymond “Walt” Neale, age 80, of Three Rivers, died Monday, June 6, 2016 at Bronson Methodist Hospital in Kalamazoo. He was born in Kalamazoo on Nov. 23, 1935 the son of Thomas and Edith (Beardsley) Neale. He graduated from Kalamazoo Central High School in 1953, and later served in the U.S. Navy. Walt was married to Sharon J. Bos on Aug. 17, 1957 in Kalamazoo. They have resided at Pleasant Lake near Three Rivers since 1966. Walt was an employee of Consumers Power Company for over 40 years, most recently working from the Gas Compression operation near White Pigeon. He was a member of the Three Rivers Elks Lodge #1248 and Eagles Lodge #1503. Walt was a sun-chaser, and greatly enjoyed boating, yard-work, and visits to Florida. He was a handyman, and would attempt to fix almost anything.

Walt is survived by his wife, Sharon; two children, Ron (Teresa Cytlak) Neale of Three Rivers and Susan (Dan) Hodge of Indianapolis, IN; brother, Thomas (Sandy) Neale of Portersville, CA; and sister, Cora Lewis of Austin, TX; nieces and nephews. He was preceded in death by his parents; and by two sisters, Carrie Gerrie and Vivian Baker.

The family will receive friends from 2 to 4 and 6 to 8 p.m. Wednesday at the Eickhoff Farrand Halverson Chapel in Three Rivers. Funeral services will be at 11 a.m. Thursday, June 9, 2016 at the funeral home with Rev. Bob Anderson, Pastor of the Three Rivers Church of the Nazarene officiating. Burial and military honors will take place at 10 a.m. Monday, June 13, 2016 at Ft. Custer National Cemetery in Augusta, Michigan. Memorials may be directed to a charity of one’s choice. Condolences may be expressed online at www.efhchapel.com