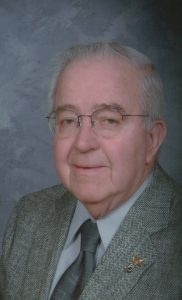 Mr. Eugene “Gene” Franklin Schull Sr., age 88, of Three Rivers, passed away peacefully on Thursday, July 14, 2016 at the Bowman House. He was born on September 23, 1927 in Lockport Twp. (Three Rivers) MI. the son of the late Leslie and Beatrice (Wagner) Schull.

Gene had been a resident of Three Rivers and Colon his entire life. He graduated from Colon High School in 1948. Gene served his country in the U.S. Army in the Philippine Islands in 1946. On November 25, 1950 he married the love of his life Shirley (Trump) Schull in Howe, IN. They celebrated fifty years of marriage in the year 2000.

Gene was employed for over 36 years by the Armstrong International Corporation retiring in 1993. Gene was a charter member of the Three Rivers Police Auxiliary and the Three Rivers Fire Department for twenty three years. He served on the zoning board of appeals and the Riverside Cemetery board. Gene was a member of the American Legion Hice-Shutes Post #170 and served on the Honor Guard for many years.

Mr. Schull was preceded in death by his wife, Shirley Schull who passed in 2007; one grandson Daniel Schull, and one brother.

Funeral Services will be held 11:00 a.m. on Tuesday, July 19th, 2016 at the Hohner Funeral Home with Pastor Robert Bartz officiating. Interment will be held in the Riverside Cemetery with Military Honors under the auspices of the American Legion Hice-Shutes Post #170

Memorials may be donated to the Three Rivers Fire Department or the American Legion Hice-Shutes Post #170. Envelopes available at the funeral home and online condolences may be left at www.hohnerfh.com.