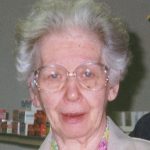 Roseann Weidman, age 97, of Three Rivers passed away on Thursday, December 15, 2016 surrounded by her family at Heartland Healthcare Center. She was born in Three Rivers, on November 10, 1919 the daughter of Monte and Mary (Blum) Kennedy.
She was a resident of Three Rivers her entire life and attended Three Rivers Schools graduating with the class of 1937. She enjoyed working on the reunion committee where she made many memories with her former classmates. On May 29, 1948 she was united in marriage to George R. Weidman, Jr. at the Catholic Church formerly located on South Main Street in Three Rivers. She was a devout catholic and it was reflected in every aspect of her life. She also served with the Daughter’s of Mary for many occasions.
Roseann adored small children and helped many young mothers in need. She was also an avid sports fan especially Notre Dame and Detroit Lions. She was a wonderful mother, wife, and friend whom will be greatly missed by all who knew her.
She was preceded in death by parents, husband George Weidman, sister, Eileen Bohm, and a brother, Jack V. Kennedy, Sr.
Roseann leaves to cherish her memory daughters, Mary E. Weidman and Jane Weidman-Avery both of Three Rivers; grandson, Matthew (Regan) Avery of Three Rivers; two nephews and many cousins.
The family will receive friends from 6:00 – 8:00 p.m. on Tuesday, December 20, 2016 with Rosary Services beginning at 7:30 p.m. at Hohner Funeral Home.
Mass of Christian Burial will be held at 11:00 a.m. on Wednesday, December 21, 2016 at Immaculate Conception Catholic Church with Fr. Antony Rajesh as celebrant.
Interment will be held at Riverside Cemetery, Three Rivers.
Memorial donations may be directed to the Immaculate Conception Catholic Church. Envelopes will be available at the funeral home. Online condolences may be left at www.hohnerfh.com.