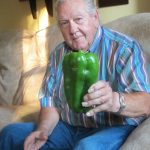 Richard W. Munson, age 88, of Constantine, passed away Sunday, January 22, 2017 at his home. He was born in White Pigeon on April 25, 1928, a son of Paul and Dorothy (Lawson) Munson. Richard attended Constantine Schools. On September 26, 1948, he married Lois M. Leister at the Messiah Lutheran Church parsonage in Constantine. Richard retired from the White Pigeon Paper Company in 1992 after 45 years of working in the maintenance department. Also, he previously worked at the Constantine Creamery. Richard enjoyed bowling in the Three Rivers Senior League, going to casinos, traveling, fishing, and gardening.

Relatives and friends will be received Wednesday from 3-7 pm at Eley Funeral Home, Constantine where Religious Services will be held Thursday at 11 am. Pastor Paul Booko of Riverside Church will officiate. Interment will be in Constantine Township Cemetery. Memorial contributions may be made to St. Joseph County Animal Rescue Fund or to West Michigan Cancer Center. Online messages may be left for the family at www.eleyfuneralhomes.com.