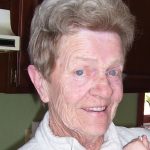 Mary Louise Orr, age 80, of Three Rivers passed away on Saturday, February 4, 2017 at Heartland Healthcare Center. She was born on July 10, 1936 in Port Huron, MI the daughter of Frank and Bessie (Kibble) Desero.
Mary was raised in Mendon by her foster parents Mr. and Mrs. DeCola. She was a graduate of Mendon High School. She was united in marriage to Gary W. Orr on June 30, 1956. She was a resident of Three Rivers. Mary was a homemaker and raised three children. She was a playground attendant for Hoppin School for many years. Mary was also a member of Three Rivers Elks Lodge # 1248 and Three Rivers Eagles #2303. Mary enjoyed bowling, gardening and country western music. She loved hosting friends and family dinner and cards, especially euchre.
Mary was preceded in death by her parents: her son, Glenn Orr; and brother, Donald Desero.
Surviving to cherish her memory are husband Gary Orr of Three Rivers; daughters, Pamela (Andy) Zagon and Vickie Orr; sisters Peggy Pierce and Leona DeHaan; brother Thomas; grandchildren, Melissa (Arnie) Kohler and Chelsea Zagon; great grandchildren, Liam Collins and Devon Kohler.
In keeping with Mary’s wishes cremation will be conducted and memorial services will be held at 6:00 p.m. with visitation one hour prior on Friday, February 10, 2017 at Hohner Funeral Home.
Memorial donations may be directed to the Charity of One’s Choice. Envelopes available at Hohner Funeral Home in care of arrangements. Online condolences may be left for the family at www.hohnerfh.com.