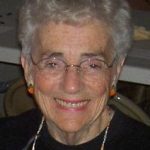 May Jewel Sziede, age 90, of Marcellus, passed away Monday, February 6, 2017.
May was born May 12, 1926, in Kokomo, IN the daughter of Oather Preston and Lizzie Alice (Wise) Owen. She was welcomed home by siblings Louise, Lorene, and Oather Jr. Later a little brother named Robert was born, who survives. The family moved several times before settling in Three Rivers, MI where May graduated from high school in 1945. During high school, she worked at Warner’s Dry Cleaners and Daugherty’s Bakery. She then moved to Kalamazoo and worked as a telephone operator for Michigan Bell.
On January 11, 1948 May married Allan Bertrand Sziede. They lived their entire lives on Little Cedar Lake, Marcellus, also known as “Sziedeville”. Allan was employed by Eaton Corporation and May worked at Latex in Schoolcraft and drove bus for Marcellus Schools; however, being a homemaker was her number one priority. Together they were blessed with four children who survive: Nancy (Phil) Smoker, David (Pat) Sziede, Alison (Larry) Smeltzer and Brian (Natalie) Sziede. She is also survived by grandchildren, Darryl Warner (Deb Clark), Becky (Todd) Borger, Halee (Jeff) Surach, Kara (Thomas) Stout, Alanna (Caleb) Stout, Garrett (Ali) Smeltzer, Hilary Sziede (Russell Smith) and nine step-grandchildren. Also surviving are 15 great grand-children and one great-great grandchild. May was also blessed with many step grandchildren.
May was enthusiastic about music. She could play many instruments by ear – the piano, organ, accordion and guitar were favorites. She always had a tune in her head and a dance in her step. Al played steel guitar and together they filled their home with music. She followed his band and enjoyed socializing and dancing with everyone. Other hobbies included bowling, gardening, canning, making wedding cakes, knitting, crocheting, making crafts, sewing, playing computer games, and putting puzzles together. She was a dedicated wife and mother and loved her family very much. For years she and Al hosted weekend long family reunions.
With their children raised, May and Al spent 5 years in Mission, Texas during the winter months. They were accompanied by many friends and neighbors from Marcellus and made many new “Winter Texan” friends. This is where Al passed away February 2, 1991. May continued her winter travels to Mission for the next 24 years until no longer able. Even then she never complained, living life with humor and zest.
The family will receive friends from 4 to 7 PM Friday, February 10, 2017 in the Mater-Ralston Funeral Home.
Memorial services will be held at 11 AM Saturday, February 11, 2017 in the funeral home with Pastor Bob Owen officiating. Burial of cremains will be in Marcellus Cemetery. Memorial contributions may be directed to the Marcellus Schools Band Program or Marcellus V.F.W. Post 4054 general fund.
Please leave a memory of May at www.materralstonfuneralhome.com. Memories will be cherished as she will be dearly missed.