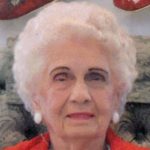 Vivian E. Johnson, 96, passed away on Sunday, February 19, 2017, at Country Living Adult Foster Care in Portland, MI. She was born February 21, 1920 in Lockport Township, daughter of Joseph and Nellie (Morrison) Dunworth. Vivian graduated from Centreville High School in 1938. On October 6, 1940 she married Charles Johnson at Centreville United Methodist Church. He preceded her in death September 1, 1991. Vivian worked as a waitress at Ottawa Beach Inn, Holland, and as groundskeeper with her husband at Ottawa County Fairgrounds for 40+ years. The family would like to give special thanks to Vivian’s granddaughter, great-granddaughters, and staff at Country Living for providing such loving and supportive care to their mother.

Relatives and friends will be received Thursday, from 11am to 1pm at Centreville United Methodist Church. Religious services will follow at 1pm. Pastor Jim Stilwell, Three Rivers First United Methodist Church, will officiate. Interment will be in Prairie River Cemetery, Centreville. Memorial contributions may be directed to Country Living Adult Foster Care. Online messages may be left for the family at www.eleyfuneralhomes.com.