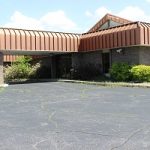 The St. Joseph County Commission On Aging is eyeing a long-vacant hotel for not only its new headquarters, but senior housing as well.
COA executive director Tim Stoll confirmed he is reviewing options and projected expenses related to converting Three Rivers Inn to suit the agency’s needs.
Stoll, however, said the process is in its infancy and he plans to share details with the COA board at its meeting Wednesday next week.
Located on an eight-acre parcel east of U.S. 131 along the south side of Broadway Street, the former Three Rivers Inn opened in the late 1960s as a Holiday Inn Holidome. It features 98 rooms, a kitchen, swimming pool, meeting rooms and other amenities that would complement its use as a senior center.
The appeal, Stoll concurred, is the residential opportunity the former hotel offers.
St. Joseph County Treasurer Judie Ratering said she foreclosed on the property April 1 after its $156,000 in taxes fell into arrears for tax years 2014, 2015 and 2016.
How the COA would finance the cost necessary to remodel the hotel to meet its use is something Stoll and the COA board would have to work out, Ratering said. Projected expenses to bring the building up to code and into the state the COA would like have come in around $4 million, Ratering said.