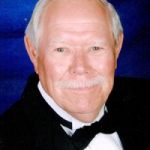 William Cunningham passed peacefully from this life the morning of Monday, July 19, 2021 after …