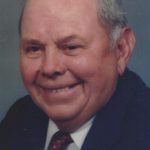 Frank L. Summe, age 94, of Decatur, MI passed away Monday, May 8, 2017.
He was born in Warsaw, IN on March 28, 1923, the only child of John B. and Elva L. (Rowland) Summe.
He attended Mishawaka High School, graduating in 1941. He joined the United States Marine Corp., serving from 1943-1945. Frank served in the Asiatic Pacific as a Corporal. He retired from B & G Construction Company in Mishawaka in 1984. He was a life member of the Marcellus V.F.W. Post 4054.
He was preceded in death by his parents, his wives, Virginia Hoffman Summe, Arlene Forney Summe, and daughter Victoria Summe Christensen.
Frank is survived by his wife Eilene Hughes Cuddeback Summe. Son, Gary (Pam) Summe of South Webster, OH; daughters, Kellie (Chris) Pich of Mishawaka, IN, Shellie (Rich) Brubaker of Niles, MI and Daun (Phil) Smith of Elkhart, IN; step-sons, Bruce Cuddeback of Niles, MI and Byron (Brenda) Cuddeback of Marcellus, MI; step-daughters, Johnell Cuddeback-Weintraub of Kalamazoo, MI and Jean (Brett) Emmons of Lake Elmo, MN. Also surviving are 15 grandchildren and several great-grandchildren.
The family will receive friends from 10 to 11 AM Friday, May 12, 2017 in the Mater-Ralston Funeral Home, Marcellus. Funeral services will immediately follow at 11AM. Burial will follow at St. Joseph Memorial Gardens, Granger, IN.
Memorial contributions may be directed to the Marcellus V.F.W. Post 4054 or Hospice of Southwest Michigan. Online condolences may be left at www.materralstonfuneralhome.com