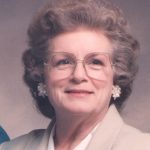 Helen Joan Wright, 89, of Three Rivers, passed away May 17, 2017 at her home. She was born on June 6, 1927 in Mottville Township, MI, a daughter of John and Helen (Friesner) Oswalt. Helen graduated from Constantine High School in 1945. On April 14, 1947 she married Leo Wright in South Bend. He preceded her in death March 19, 2015. Helen served as reception manager at Armstrong Hall in Three Rivers from 1969 to 1979. She sang with the Sweet Adelines in Kalamazoo for several years and enjoyed her garden, flowers, and birds. Helen loved and cherished being able to spend time with her children and grandchildren.

Relatives and friends will be received Sunday 2-4 at Eley Funeral Home, Constantine where Religious services will be held Monday at 11 am. Pastors Dan Lane and Brian Wright will officiate. Interment will be in Riverside Cemetery, Three Rivers. Online messages may be left for the family at www.eleyfuneralhomes.com