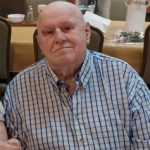 Marvin Van Scoik, age 90, Three Rivers died on Tuesday, May 9th at 8:30 pm, at his home following a lengthy illness. He was born in Fulton County Indiana, on December 8, 1926 the son of Charles (Berlin) and Laura (Fay) Van Scoik, Elkhart, Indiana.

The family moved to Three Rivers in 1954 because of employment with the US Postal Service. Marvin worked at Bonfoey Dairy with a delivery route to many residences in the Three Rivers area. He had lengthy career at the G&A Truck lines, and Continental Can until his retirement 1990.