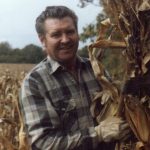 William “Bill” Martin Steinbach, age 74, of Three Rivers passed away on Sunday, June 4, 2017 at Bronson Methodist Hospital. He was born in Chicago, IL on October 24, 1942 the son of William Henry and Gertude (Miller) Steinbach.

Bill served his country in the U.S Army until his honorable discharge in 1968. He then owned and operated Floating Bridge Tool and Machine for over thirty years. On September 24, 1966, Bill was united in marriage to Nancy Henson whom survives. He was also a member of the American Legion Post #170. Bill treasured being outdoors and soaking up the warm sunshine and hot weather. He enjoyed gardening, cutting wood, baling hay and straw, and listening to the birds together with his wife, Nancy. He also cherished time with his family and grilling out on warm summer days.

Bill’s family has requested donations of pet food and pet supplies can be brought to the funeral home to be collected for Animal Rescue Fund of St. Joseph County.