The village of Colon has employed an unusual source to clear a park area overrun with poison ivy and undesirable weeds.
A herd of 10 goats was hired by the Colon Parks Board to rid the west edge of Colon Community Park of the overgrowth.
Park Board member Edith Doenges said the goal was to tidy up the area before the village hosts its annual Fourth of July celebration next week. Doenges said the park board called Coldwater-based Munchers on Hooves and the herd was brought to the site Monday evening en route from a job at Eagle Lake in Decatur.
A fenced-in, rectangular-shaped area stretching north-south was set up to create an area in which the goats were to do their work. Doenges said the herd had done an impressive job and the pen was moved further north later Tuesday.
By the time they are picked up Wednesday evening, the job will have cost the park board just $160, she added.
More information about Munchers on Hooves is available on its Facebook page. 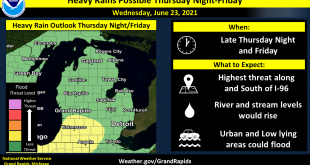