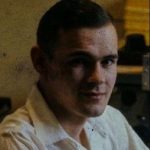 Larry was a staff announcer and general manager at WLKM Radio during the 1960s, using the air name Larry Wayne.

A private internment at the Constantine Cemetery will be held at 10:00 AM on Saturday, June 10, for immediate family. Family and Friends may gather at 2:00 PM at Freshwater Church, 600 E. Michigan, Paw Paw, for a Celebration of Life service.