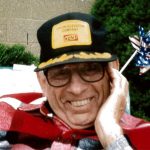 Lyle Paul Outman, age 92, of Leonidas, died early Thursday June 1, 2017 at his home with his family at his side. He was born in Leonidas on Sep. 28, 1924 the son of the late Lloyd and Elda (Krumm-Hagelgans) Outman. He attended Colon High School where he played on the football, baseball, and basketball teams. He was a life-long farmer and joined three of his brothers in the family business, Outman Brothers, Inc. He was married to Rosemary Barnebee on May 15, 1954 in Leonidas. They were married for 47 years, raising their family with patience and a great sense of humor. Lyle attended the Leonidas Bible Church where he served as a Deacon, and later joined the Crossroads Missionary Church in Mendon. He was a born-again Christian who shared his faith and love with many. Lyle listened to Country-Western, Grand Ole Opry, and Gospel music. He enjoyed birding, watching cattle in the pasture, and walks in the fields, and no thistle survived those walks. He was a big fan of the Detroit Tigers and enjoyed visiting with fellow farmers, family, and friends. He put God, country, and family first, but enjoyed quietly helping community members behind the scenes.

The family will receive friends from 5 to 7 p.m. Sunday at the Eickhoff Funeral Home in Mendon. Funeral services will be 11 a.m. Monday June 5, 2017 at the Crossroads Missionary Church near Mendon with Pastor Bryan Balasa officiating. A social gathering will follow at the church. Private interment will take place later in Leonidas Cemetery. Memorials may be directed to the John Outman Memorial Scholarship in care of the Mendon Community Schools Foundation, or to any veterans organization of your choice. Condolences may be expressed to the family online at www.eickhofffuneralhome.com