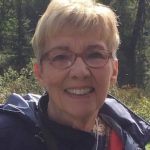 Marna was a graduate of Three Rivers High School class of 1955. She furthered her education and earned a Bachelor’s Degree in Education from Michigan State University where she was a member of the Tri Delta sorority. Marna was united in marriage to Loran D. Prine on August 20, 1960, who preceded her in passing in 2010. She taught at Milwood Methodist Nursery School and Galesburg-Augusta Schools.

Marna attended St. Andrew’s Community Church and was also a founding member of the Mad Dogs and Englishmen Car Club of Kalamazoo. She was a lover of all animals especially her dog, Sophie. Marna was a caring friend and devoted mother and grandmother who will be dearly missed by all the many lives she touched with her generosity and kindness.

Cremation will take place and a memorial service will be held at the Hohner Funeral Home of Three Rivers at 12:00 noon on Saturday, June 10, 2017, with visitation one hour prior to services. Pastor Jim Dyke will officiate. She will be laid to rest with her husband in Riverside Cemetery, Three Rivers. Memorial contributions may be made to the Kalamazoo Humane Society. Envelopes available at the funeral home. Family and friends may share a condolence message online at www.hohnerfh.com.