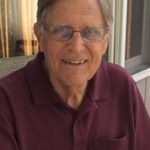 Peter A. Boelens, M.D., age 83, of Vicksburg, Mississippi, went to be with the Lord on Friday, June 9, 2017, in Kalamazoo. Born to Peter and Charlotte (Doezema) Boelens in Lansing, Illinois, Peter began his career as a medical missionary in South Korea and continued his work in Mississippi, developing the Cary Christian Center in Cary, Mississippi, as well as 22 Christian medical-evangelistic programs in various countries around the world as executive director of the Luke Society. In retirement, he and wife Eleanor began a prayer ministry and published a research study showing the healing power of prayer in transforming the lives of over 60 participants suffering from anxiety and depression. In addition, he published a groundbreaking study with Baylor Medical Center using MRI that showed significant brain changes following healing prayer. He and Eleanor wrote and published three books: Delta Doc, Where Next Lord?, and Released to Soar. He enjoyed fishing, photography, and brain research. Fueled by his deep love for God, he was passionate that everyone would experience the power and healing touch of Jesus in their lives.

In addition to his parents, he is preceded in death by sisters Sheila Van Oyen and Alice Vander Velde and son-in-law Chris Kingma. He is survived by wife Eleanor; daughters Patricia (Robert) DeVries of Exelsior, MN; Brenda (fiancé Satish Maripuri) Boelens of Bolton, MA; Deborah (James) Visser and Sara (Joel) DeVries both of Grand Rapids; nine grandchildren; one great-granddaughter; and sister Frances (Ronald) Redder of Grand Rapids, MI. His wife will miss witnessing his daily meditation in God’s Word and his focused energy; his daughters his humor and joyous nature; and his grandkids his pancake breakfasts, tall tales, and fishing. Friends and colleagues will miss his generous spirit and example as a Godly man.

A memorial service will be held on July 9 at Triumph Church in Vicksburg, Mississippi, with visitation at 3:00 p.m. and service at 4:00 p.m.