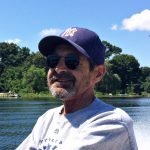 David Robert Thompson “Dave”, age 57, of Lawton, passed away on Wednesday, August 23, 2017 at home surrounded by his family after fighting a long courageous battle with cancer. David was born August 18, 1960 in Kalamazoo, to the late Robert Thompson of Paw Paw and Patricia (Rhodes) Sziede of Marcellus. His family lived in Kalamazoo before moving to Marcellus where he spent his childhood on Cedar Lake. David attended Marcellus Community Schools. He participated in Little League and basketball where he created lifelong friendships and a love for sports. On September 27, 1986 he married Deitra (Drake) Thompson at the Marcellus United Methodist Church. In 1989, he moved his family to Long Beach, California where David worked in telecommunications as a lineman running fiber optic cable across Southern California. He moved back to Michigan in 1995 and settled in Lawton with his wife and four children. David volunteered for several years as a coach for his children’s little league teams. He conveyed his passion for the sport of baseball and softball to the many children he coached over the years. Nothing made him happier than watching them play and enjoy all sports. He loved the Miami Dolphins and was an avid New York Yankee fan and rarely missed watching them on television and attended games at ten different major league ballparks. David had many interests and hobbies including golf which quickly grew to be one of his favorite activities. He participated in a men’s golf league at Pine View Golf Course for three years. He loved listening to music and attended many concerts. He and his wife built a house on Cedar Lake where they raised their children and he spent the rest of his life doing the things he loved most, racing around the lake in his speed boat and gardening. David will be missed not only by his family, but by his numerous friends throughout the community. David is survived by his wife, Deitra, a son, Daniel of Lawton; daughters, Bailey and Sarah of Grand Rapids; a son, Nicholas of Lawton; two grandsons, Landon and Benjamin; his mother, Patricia (David) Sziede; two brothers, Randy(Kim Gillespy) of Dowagiac and Richard (Teresa Lewis) of Marcellus; sister, Debra (Darryl Warner) Clark of Hickory Corners; step sister, Laura (Mark) Bouwman of Gobles; step sisters, Becky(Todd) Borger and Halee (Jeff) Surach of Marcellus; mother in law, Patricia Drake of Marcellus; sister in law, Lori Drake of Chino Valley, AZ; Denise (Kim) Hemenway of Decatur; sister in law, Debbie (Phil) Staunton of Lawton; many nephews, nieces, cousins, treasured friends, and his beloved dogs, George and Oliver. David was preceded in death by his father, Robert Thompson; father in law, Lowell Drake; grandfather, John Thompson; grandmother, Myrtle Thompson; grandfather, Ralph Rhodes; and grandmother, Iva Rhodes. Visitation will be held Thursday, August 31, 2017 at Mater-Ralston Funeral Home in Marcellus from 10:00am to 12:00 and a celebration of his life at 12:00pm. In lieu of flowers, memorials may be directed to his family.