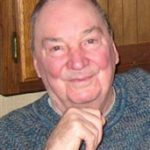 Gerald “Jerry” Glass, age 85, of Three Rivers passed away on Thursday, August 3, 2017 at Borgess Medical Center after a short illness, surrounded by his family.

He owned and operated a farm west of Three Rivers from 1958 until 1970. He then owned and operated a successful mobile home park located on his farm property. He also loved to race his stock car with his son, John. After selling his mobile home park, Jerry enjoyed raising a small herd of bison. In his younger years he spent many years with 4-H and raised Betsy, whom became the championship cow. He enjoyed spending time outdoors, tending to his land, and cherishing his children and grandchildren.

The family will receive friends from 11:00 a.m. until time of funeral services beginning at 1:00 p.m. on Tuesday, August 8, 2017 at Hohner Funeral Home with Pastor Robert Doane officiating. Interment will be held at Shavehead Lake Cemetery, Porter Twp, Cass County, MI.

Memorial donations may be directed to the Charity of One’s Choice. Envelopes available at Hohner Funeral Home in care of arrangements.