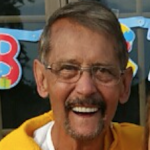 Paul “Rick” Warner, age 66, of Centreville, passed away on Saturday, September 9, 2017. He was born in Three Rivers on October 12, 1950, a son of Paul and Ilah (Kline) Warner, Jr. He graduated from Centreville High School in 1969. On August 28, 1971, he married Betty Bender in White Pigeon. They were later divorced. Rick worked at Kirsch in Sturgis from 1971-1996, Johnson’s in Three Rivers from 1996-2002, and Lear Corporation in Mendon from 2002 until retirement in 2015. He enjoyed all sports including basketball, baseball, football, track, and golf. He was an avid hunter and fisherman and loved spending time with his grandchildren.

Relatives and friends will be received 2-4 and 6-8 pm Tuesday at Eley Funeral Home in Centreville. Religious services will be held at 11 am Wednesday at the funeral home. Interment of ashes will occur at a later date in Prairie River Cemetery. Memorial contributions may be made to St. Joseph County ARF or Center for Hospice Care, Mishawaka. Online condolences may be left for the family at www.eleyfuneralhomes.com.