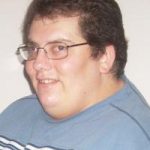 Shane Alan Ream, age 40, of Three Rivers, passed away at Bronson Methodist Hospital on Friday, September 15, 2017 only days after being diagnosed with Leukemia. Shane went to be with our lord, bathed in the rays of a magnificent sunrise, surrounded by his loving family. Shane was born on May 16th, 1977 at Three Rivers Hospital to parents Nancy (Ream) Martin and William Ream.
Shane was a 1996 graduate of Three Rivers High School and a lifelong resident of Three Rivers. Shane was employed for many years at Peterson Springs and spent several years as a mentor in the Big Brothers/Big Sisters program.

Shane participated in Three Rivers Little League and played football into his high school years. He developed a lifelong love for the Chicago Cubs and Notre Dame football. Shane’s enthusiasm for sports also included hockey and he became an avid follower of the K-Wings. You could find him at the stadium cheering on his favorite team alongside his treasured family and friends.

Shane enjoyed spending time with his family and friends. Whether it was getting together at the Dairy Bar, cookouts at his friends, spending holidays with family, playing games over coffee or just popping in to say hi. Shane loved nothing more than to simply spend a moment being with you. Shane never met a stranger and he lived life with an open heart ready to meet his next friend.
Shane was a member of the Riverside Church where he participated in all aspects of the church. Shane’s faith was strong throughout his life and he now rests in the arms of his lord and savior. He will be greatly missed by all those who knew and loved him.

Cremation has been conducted according to Shane’s wishes. A memorial service will be held on Saturday, October 28, 2017 at Riverside Church, 207 E. Michigan Ave. in Three Rivers at 2:00pm to celebrate and share fond memories of Shane’s life. Pastor Amy Kemp of Riverside Church will be officiating.