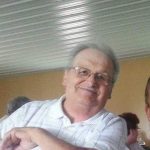 On June 9, 1956, he married Katie Ann Borkholder Miller at Moorepark Mennonite Church, Three Rivers. They lived in the Mendon area for 32 years then moved to Centreville in 1989. He and his wife owned and developed Eddie’s-Hide-Away Campground in Centreville for many years. They were also owners of Wheel Camper Corporation in Centreville. In 1973, they built E&K Restaurant, Centreville. Together they managed it for 22 years. They were known for their good food. They worked together many years of their married life. They were also one of the founders of Yapper Camping Group in Centreville/Three Rivers area. They enjoyed camping with their family and friends.

Relatives and friends will be received Tuesday from 2-8 pm at Firm Foundation Ministries, where religious services will be held Wednesday at 11 am with Pastors Randy Miller and Tom Schwartz officiating. Interment will follow in Nottawa Township Cemetery. Memorial contributions may be directed to Gideon’s International. Arrangements were entrusted to Eley Funeral Home, Centreville. Online condolences may be left for the family at www.eleyfuneralhomes.com.