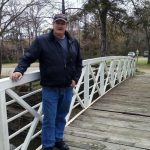 John Fabian Swift, age 62, of Marcellus, passed away Wednesday, October 4, 2017.
He was born September 13, 1955 in South Bend, the son of Glen D. and Bertha E. (Miller) Swift. He married Sally F. (Parsons) Kohler in 1979 who survives. On November 26, 1994 in Volinia he married Elaine M. Whitten who preceded him in death in 2012.
John graduated from Marcellus High School in 1975.  He currently worked at American Axle in Three Rivers as a machinist. He also formerly owned Swift Small Engine Repair in Marcellus. He loved being outside and tinkering with things in the garage.  He enjoyed boating, fireworks and drag racing.  He was a avid Chicago Bears and Notre Dame fan.
He is survived by one daughter, Danielle (Sean) Kean of Portage; step-mother, Virginia Swift of Marcellus; best friends, Randy and Patty Burk; two brothers, David Swift and Jerry (Susan) Swift, both of Marcellus and one grandson, Mason Kean.
The family will receive friends from 6 to 8 PM Monday, October 9, 2017 at the Mater-Ralston Funeral Home.  Memorial services will be held at 11 AM Tuesday, October 10, 2017 in the funeral home.  Memorial donations may be directed to Mason’s College Fund.  Online condolences may be left atwww.materralstonfuneralhome. com