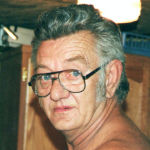 John W. Grant, 75, of Constantine, passed away on Wednesday, November 29, 2017 at Borgess Medical Center. He was born in Constantine on March 7, 1942, a son of George and Myrtle (Eshelman) Grant. On February 20, 1964, he married Judy Carter in Centreville. She preceded him in death on July 21, 2014. John previously worked for Denton Mills in Centreville, Stoutco in Bristol, RV in Mottville, and most recently Viking RV, where he retired from after being employed for 20+ years. John enjoyed fishing, hunting, and spending time with his family.

Relatives and friends will be received Friday, December 1 from 2-4 and 6-8 at Eley Funeral Home, Constantine, where funeral services will be held Saturday, December 2 at 11am. Pastor Dan Lane will officiate. Interment will follow in Constantine Township Cemetery. Online messages may be left for the family at www.eleyfuneralhomes.com.