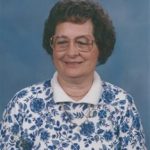 Nola graduated Three Rivers High School with the class of 1944.  The class yearbook described her as “everybody’s friend, nobody’s enemy”.  Prior to high school she was active as a Campfire Girl.  During high school she lettered all four years in Girl Sports, being their Vice President her senior year, and participated in chorus, Cantata and A Capella.

Mrs. Bowlby was preceded in death by her parents, her husband Warren and her brother, Delton Heckelman.

Nolan and Warren led very active lives raising their family, snowmobiling, camping with their travel trailer, mushroom hunting in Northern Michigan, square dancing and round dancing.  Nola was a Brownie and Girl Scout Leader, an Avon Lady, worked for the R.M. Kellogg Company of Three Rivers, and managed the operations of the family Poultry Farm.  In 1986 she started the River Forest Ladies Auxiliary Club, serving as their leader for ten years.  In the early 1990’s she and Warren left Three Rivers and retired to Arizona where they enjoyed golf, traveling with friends and family and entertaining in their home.  Many of the golfers looked forward to the 19th hole parties at the Bowlby’s as Nola always baked cookies for them to take home.

The family will receive friends from 11:00 a.m. until time of funeral services at 12:00 noon on Saturday, December 2nd, 2017 at the Hohner Funeral Home, with Sister Nora Frost officiating. Interment will be held at Riverside Cemetery, Three Rivers.

In lieu of flowers the family asks that donations be made to the Alzheimer’s Association or American Heart Association.