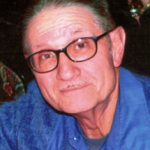 Paul J. Fifer, 84, of White Pigeon, passed away on Wednesday, November 8, 2017 at Grace Healthcare in Three Rivers. Now he is singing with his Lord in Heaven. He was born in Three Rivers on March 25, 1933, a son of Elmer and Leopoldine “Birdie” (Hotovy) Fifer. Paul graduated from Centreville High School in 1952. He worked as a janitor at Sturgis Schools for many, many years, before retiring at the age of 62. On August 2, 1985, he married Lorraine Barkalow Smith in Three Rivers.

According to Paul’s wishes, cremation has taken place. A private interment of ashes will occur in the Prairie River Cemetery in Centreville. Arrangements were entrusted to Eley Funeral Home, Constantine. Online messages may be left for the family at  www.eleyfuneralhomes.com.