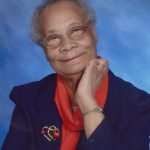 Clara Mae James, age 90, of Three Rivers, passed away on Sunday, Dec. 3, 2017 at Grace Healthcare. Clara was born to the parents of the late Allen Brown and Janie Harris on March 28, 1927 in Bessemer, Alabama. She was preceded in death by nine siblings.

She was married to Woody James, her husband of over 70 years. From this union their daughter, Barbara, was born.

As a pillar of faith and stability in the church, she was crowned with the title of “Mother”. During her many years of service, she was a member of the Official Board as Church Secretary. She also served as an Adult Sunday School Teacher and a member of the Missionary Ministry. In appreciation of her commitment to Bethel Baptist Church for over 50 years, she received the following recognitions: an award for continued dedication to the Teaching Ministry by Pastor Bobby Joe Tolbert in 1987, the “Solid Rock” award for outstanding service, enduring commitment, and devoted leadership by Pastor D.W. Tolbert in 2004, and an award for “Continuing Longevity, Devotion, and Exceptional Service” by Pastor Terry L. Cropper, Jr. in 2014. In addition, she was given the “Everyone Save a Child” award by the United Sisterhood – Wolverine State Baptist Convention in 2008.

Interment will be held at Riverside Cemetery. Memorials may be donated to the Bethel Baptist Church. Envelopes available at the church and Hohner Funeral Home in care of her arrangements. Online condolences may be left at www.hohnerfh.com.