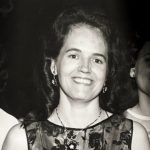 Laura retired from Dayco International in Three Rivers in 1995 after many years of employment. She previously worked at Denton Mills in Centreville.

Laura was a member of the Three Rivers Church of the Nazarene for more than 50 years. She was a children’s Sunday School teacher, member of the Dare to Care team, choir, quizzing director & served in many other ministries. Laura loved Jesus and her church. Her best pals were the “Monday Lunch Bunch” gals. She enjoyed traveling, cooking, sewing and crafts. She especially cherished her time with family and loved Thanksgivings when all the family came together.

She was preceded in death by her parents, husbands James Carlson and Fred Baker, brothers David, Gus, Aggie and John Suarez, and sister Violet.

Relatives and friends will be received Tuesday from 4-7 pm at Eley Funeral Home in Constantine. Religious services will be held 11 am Wednesday at Church of the Nazarene, Three Rivers, Pastor Robert Anderson officiating. Burial will be in Poes Cemetery, Jones.

Memorial contributions may be directed to Three Rivers Church of the Nazarene VBS.

Online messages may be left for the family at www.eleyfuneralhomes.com.