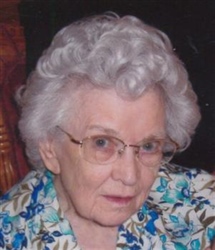 Marguerite Annabel Nichols, age 94, of Three Rivers, went home to be with her Savior on Monday, December 11, 2017 at Grace Healthcare Center, surrounded by family.

Marguerite was born on August 9, 1923, in Meeting Creek, Alberta, Canada the daughter of Peter and Lillian (Raycraft) Kettelson. She had many fond memories of her early years growing up in the tiny town. At age 13 she moved along with her parents and eight other siblings to Detroit.

On July 19, 1941 Marguerite was married to Herschel Franklin Nichols in Waynesville, Missouri. While Herschel was away during World War II, Marguerite went back to Detroit and began working for Michigan Bell Telephone as an operator. She was employed there for over 35 years. After her retirement in 1981 they moved out to Three Rivers, to be near their family and grandchildren.

Marguerite was a member of Howardsville Gospel Chapel for many years and later attended Bethany Chapel. Her faith in God and church involvement were very important to her. She was always trying to help other people. She also enjoyed traveling, sewing, crocheting, and was an excellent pie maker.

Marguerite is survived by her son Kenneth Nichols of Fruitland Park, Florida, daughter Shirley (Allen) Muldoon of Three Rivers; five grandchildren:  Steven (Loralee) Muldoon, Patty (Brandon) Evans, Kristen (Ken) Sparks, Jeffrey (Megan) Muldoon, and Mike Muldoon; and twelve loving great-grandchildren. She was preceded in death by her husband of 70 years, Herschel, in 2012, and by her four brothers and eight sisters.

The family will receive friends on Monday, December 18, 2017 from 11:00 a.m. – 1:00 p.m. at the Hohner Funeral Home with a Service to follow. Pastor Ken Gill will be officiating. Interment will be held at Moorepark Cemetery followed by food and fellowship.

In lieu of flowers the family has asked that donations be made out to The Howardsville School or the Charity of One’s Choice. Envelopes available at the funeral home.