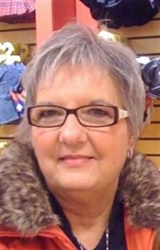 Sharon Lee Campbell, age 73, of Three Rivers, passed away on Sunday, Dec. 24th, 2017 at Borgess Medical Center following a long and courageous battle. Sharon was born on Oct. 27th, 1944 in Three Rivers, the daughter of the late Harry Draime and Mary Boggio. Following a sudden death by Mr. Draime, Sharon was raised by her mother and her husband Mr. James Crossgrove.

Sharon has been a life time resident of Three Rivers. She attended Three Rivers Schools and graduated with the class of 1963. On Dec. 5, 1965 she was united in marriage to the love of her life Mr. Bruce Campbell and out of this union were born three adored children. Sharon’s true love and passion were taking care of family and home, especially grandchildren. She loved to work in her garden, crochet, and occasionally hit the slot machines. Sharon also was instrumental in the running of the family business, Campbell Electric. She was a member of Immaculate Conception Catholic Church.

Sharon was preceded in death by her three parents; brother, Richard Draime and two brother-in-laws, Pete Lagoni and Bob Vanderhoof.

In accordance with family wishes cremation will be conducted.

The family will receive friends from 10:00 a.m. until time of memorial services beginning at 12:00 p.m. on Saturday, December 30, 2017 at Hohner Funeral Home with Fr. Antony Rajesh as celebrant.

Donations in Sharon’s memory may be directed to West Michigan Cancer Center.  Envelopes available and also may be sent to Hohner Funeral Home in care of arrangements.